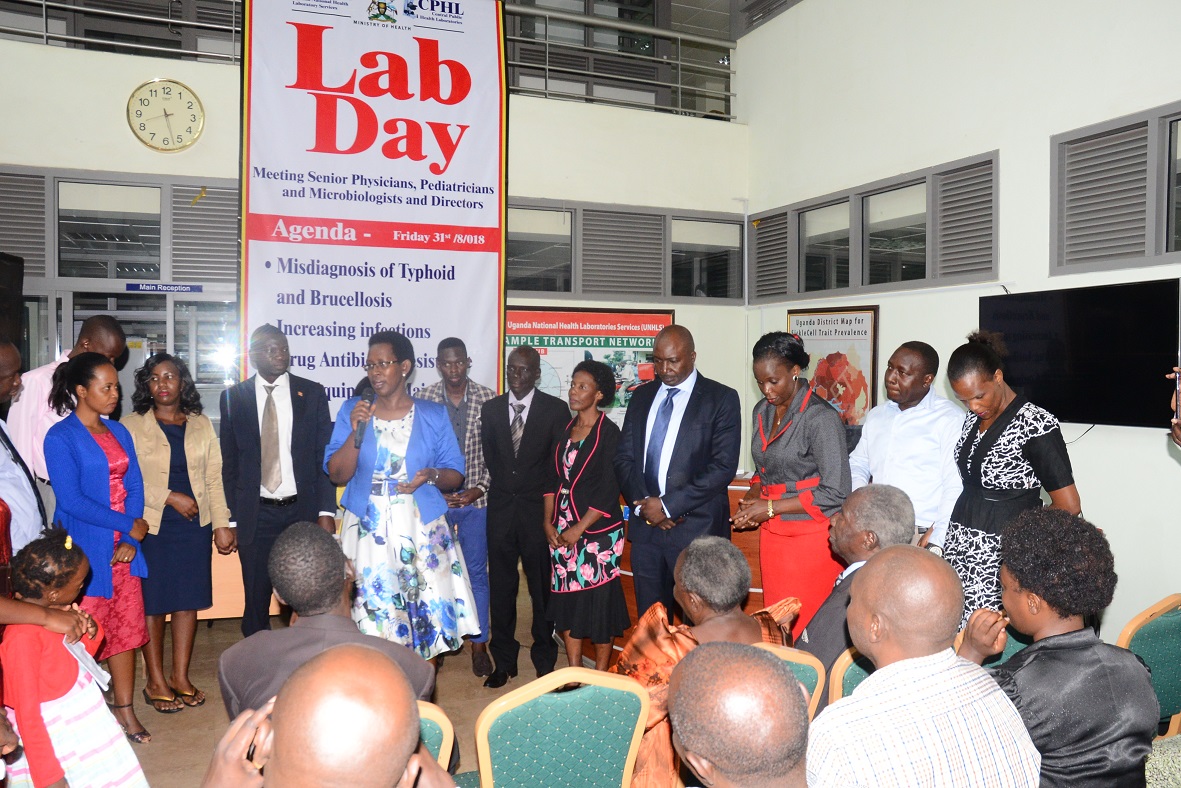 Today the Senior Physicians, Pediatricians, Microbiologists, RRH Directors and RR lab managers met to discuss on increasing misdiagnosis of infections. The day began with dedication of the fraternity into the Almighty by the PS. Dr. Atwiine Diana through a prayer breakfast. It was then followed by the meeting that she called to order at 10:00am.

As a preamble, Dr. Kalyesubula Simon said that people are complaining that the number of typhoid is high. A study done by Dr. kajumbula supported by World Bank found that those were circulating pathogens among patients below 5 yrs.

Many people now days move/run around with Cannula and it seems fashionable. What is the cannula for? The patients are moving around with either bacteria or virus infections around town, with the cannula both from private and public hospitals.

High volumes of typhoid are being reported in the DHIS2 from the lab but clinically we don’t see the epidemic of typhoid. What is the lab using to report?

Can we confirm that nobody is responsible to the infection?

He then proposed that stool should be surveyed progressively.

Dr. Arthur made a presentation on Fibril illness study findings. The AFI surveillance program set up in 6 public hospital sites within the country.

3.7% of cultures result into contaminants

80% of cultures in Arua turned out to be salmonella

Prof. Joloba remarked on widal test saying that this test is phased out in countries that can afford cultures. The best is to do blood/stool culture, bone marrow or biopsy but the challenges is that it is something most can’t afford. Widal is neither sensitive nor specific. As a take home message, we need to work as a country to come up with resolutions and issue out a guide

Challenge in the labs

Since PEPFA discontinued its support in 2016, for the last 12 months, regional referral hospitals have not done any CBC and clinical chemistry tests due to lack of reagents. Basically RDTs are being used. Patients are forced to outsource for free services and at times they get false results which are done by business oriented people who run private labs. However, some partners came into play and their offer cannot be afforded by some of our patients.

The PS Dr. Atwiine Diana remarked and thanked the leadership of CPHL for the deliberation. She went ahead and said that we need to put our heads together to come up with a policy for antibiotics and implement it to the dot to eliminate the problem. The challenge as known is that the lab services have been grossly underfunded and also there is element of mismanagement. In the upcoming meeting at the MOH headquarters, the resolutions made in her absence by the technical team shall be presented. The urgency when presented will take less than 6months to come up with a policy.

She also added that another burning issue is whether infection is controlled in our hospitals, labs and facilities both in private and government.  Some infections are hospital acquired, like resistant staphylococcus.

In a meeting she attended, she was told that 150 auto cleaves were purchased and distributed to hospitals. Of those, 77.8% are kept/stored in stores and rudimentary methods are being used like charcoal stoves and source pans. It is known, now days JIK is being used and it corrodes equipment and every other thing. And yet the standard way of infectious control is by use of alcohol.

There is decline in our practice