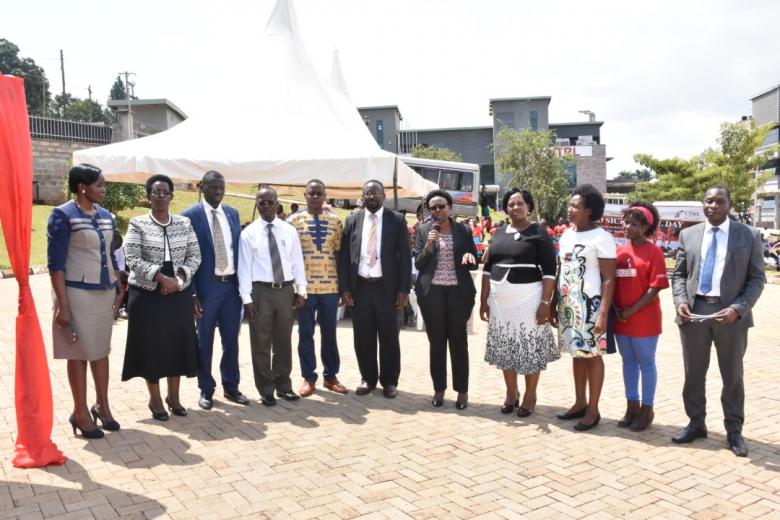 Every June 19, Uganda joins the rest of the world to commemorate World Sickle Cell day to increase public knowledge and raise awareness about Sickle Cell Disease. This year the day has been commemorated under the theme: “Caring for Sickle Cell Patients – Get Involved”.

This theme alludes to the fact that home care is the most important for sickle cell patients, which greatly reduces the incidence of crises and need for hospital care.

Officiating at the commemoration event at the National Health Laboratory and Diagnostic Services (NHLDS) in Butabika, Minister of Health Hon. Dr. Jane Ruth Aceng expressed concern over the high number of babies born with sickle cell disease each year in Uganda, which stands between 15,000 to 20,000, with an estimated 80% dying by 5 years, according to a recent nationwide survey.

“The Ministry plans to scale up newborn screening services to more high burden districts, and introduce hydroxyurea, which is a disease transforming drug, when funds become available. The Ministry has also implemented a policy of administering pneumococcal vaccine to children with sickle cell disease above 2 years, to protect them from recurrent infections.” Hon. Aceng noted.

The Permanent Secretary Ministry of Health, Dr. Diana Atwine appreciated Buganda Kingdom for joining in the fight against Sickle Cell Disease, by sensitizing the masses about the disease.

“Buganda kingdom has made sickle cell the theme of the Kabaka birthday run for 3 consecutive years from 2017. The run which attracts more than 40,000 runners each year, has created massive public awareness about sickle cell, and the screening kits received from the Kingdom have massively empowered our community outreach programs.” She said.

The Ag. Commissioner NHLDS, Dr. Susan Nabadda noted that in the past 3 years, over 200,000 new born babies have been screened, Health care workers in different health facilities trained in sickle cell care, and sickle cell clinics have been established. “In these clinics, we have ensured availability of prophylactic drugs like penicillin, anti-malarials, folic acid, pain killers and so on, for routine patient management”. She added.

A national wide survey conducted in 2014, depicted a high prevalence of sickle cell trait and disease national wide, with a national average of 13.3% trait and 0.73% disease.