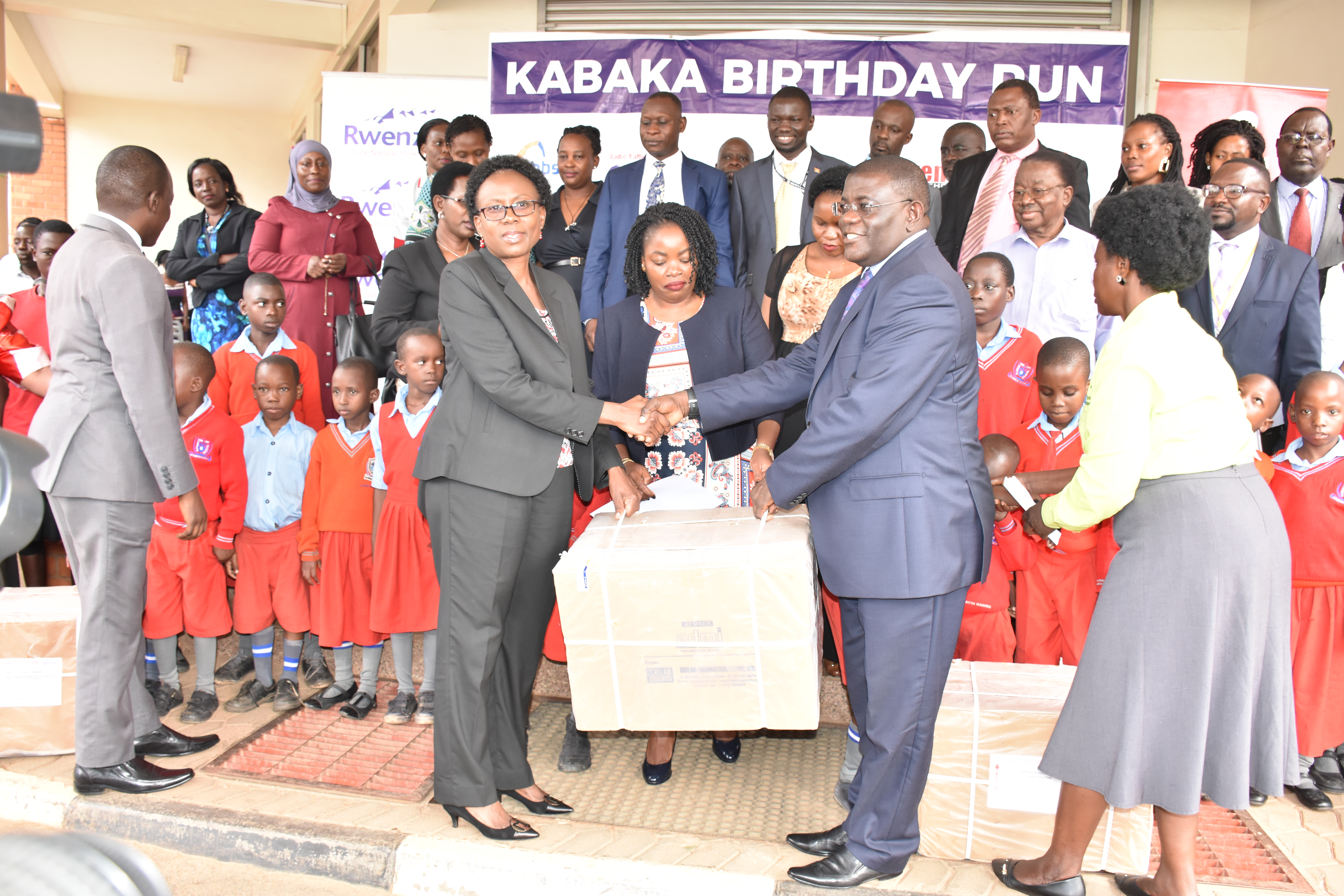 Kampala- 25th July 2019 – The Buganda Kingdom officially handed over Sickle Cell test kits procured with proceeds from the Kabaka Birthday Run, 2019, to the Ministry of Health as part of the Kingdom’s efforts to fight Sickle Cell Disease in Uganda.

In 2015, The Ministry of Health conducted a nationwide survey to map the burden of Sickle Cell Disease across the country. The results of the survey indicated a high burden of the disease across the country with the national average for sickle cell trait prevalence at 13.3% and disease at 0.73%. The survey also informed that 20,000 babies are born with sickle cell disease each year, but by 5 years, 80% succumb to the disease.

While receiving the test kits on behalf of Ministry of Health, the Minister of Health Dr Jane Ruth Aceng appreciated the support and partnership from the Buganda Kingdom in raising awareness about the disease and their contribution in reducing deaths due to Sickle Cell Disease, during the three-year partnership, through mobilizing and sensitizing the population.

“We want to thank His Majesty, the Kabaka of Buganda, for the message he gave before flagging off the 2019 Run, in which he mobilized for pre-marital screening and care for sickle cell patients. This has gone a long way to mobilize the entire country against sickle cell disease” Hon Aceng added.

Representing The Buganda Kingdom, the first deputy Katikkiro of Buganda, Owek. Hajji Dr. Twaha Kigongo noted that this year, the Kabaka birthday run attracted over 50,000 runners and raised Uganda Shillings 494 million which was used to procure Sickle Cell test kits that will be distributed across all health facilities in the country and raise awareness through health camps, media campaigns and other events.

Permanent Secretary, Ministry of Health, Dr. Diana Atwine reiterates that when people test, they seek care, adding that awareness has led to many more children being treated.

“Our partnership with Buganda has saved many lives.” she says.

The Commissioner, National Health Laboratory and Diagnosis Services, Dr. Susan Nabadda attributed a significant increase in mass awareness of sickle cell disease from 2% to 30-40% to the strong partnership with the Buganda Kingdom. “More people are aware of the disease and more people test for the disease” Dr Nabadda said.

Ministry of Health appreciates all its partners for their efforts in the fight against Sickle Cell Disease in Uganda.